“Coweta-Fayette EMC’s commitment to sharing the cooperative business model with developing nations spans more than a decade,” said NRECA CEO Jo Ann Emerson. “Their president/CEO Chris Stephens started an annual skeet shooting fundraiser in 2003 to benefit our utility partners in Guatemala. He’s also personally provided support and training to electric co-ops in Costa Rica. His dedication to sharing the electric co-op business model around the globe sets an example for co-ops that have participated in building or rebuilding efforts and those that are considering support of the International Program.”

The International Award recognizes exceptional dedication to the development of international communities through NRECA International, which provides people in developing countries with access to safe, reliable and affordable electricity. This results in increased agricultural productivity, millions of new jobs in micro and small enterprises, and higher incomes and quality of life for rural communities in more than 42 countries.

“It’s a privilege to support and promote the International Program because it helps to empower hundreds of thousands of people around the world with the most basic tool of modern life—electricity—to study and learn, take care of their health and that of their children, and work and prosper using the tools of the 21st century,” said Paul Wood, president/CEO, Georgia EMC.

NRECA International, with vital support from associations such as Georgia EMC and co-ops such as Coweta-Fayette EMC, has pioneered low-cost rural electrification in underdeveloped countries by designing distribution grids, constructing lines, and applying a set of standards that meet very specific community needs.

“No matter how you speak or with what accent the words are formed, connections between international co-ops are universal: the language of light and the spark of friendship trump any barriers that may exist,” said Stephens. “We’ve always felt a unique bond with our sister cooperative in Costa Rica, Coopeguanacaste, and with other co-ops in emerging markets. The exchange of ideas is invaluable.”

The International Program has field offices in Bangladesh, Bolivia, Dominican Republic, Guatemala, Haiti, Philippines, South Sudan and Uganda equipped to address needs on an immediate as well as long-term basis in most venues around the globe.

Wood and Stephens accepted the Award during the NRECA Annual Meeting in Orlando, which drew more than 8,500 representatives from electric cooperatives across the nation. 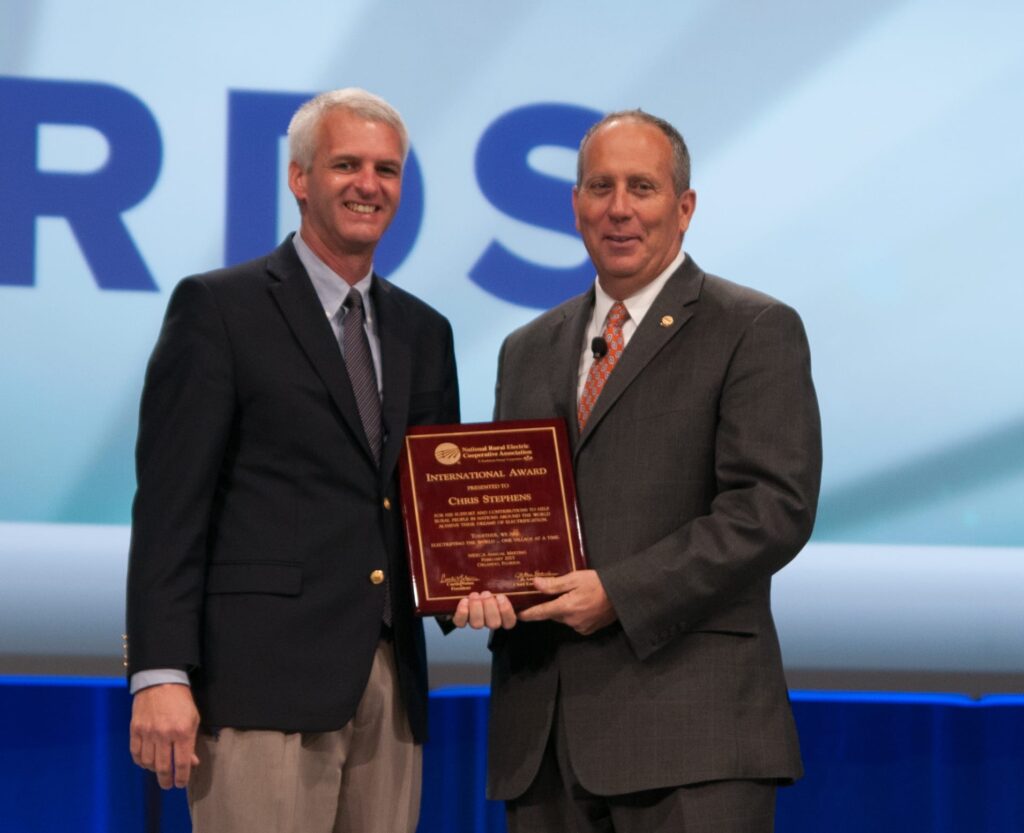