‘What’ll Ya Have?’ Local EMC Celebrates Members with Varsity, Fun at Annual Meeting

This tradition is an important part of the cooperative business model. Co-ops are open to anyone able to use their service, meaning any person who moves onto Coweta-Fayette EMC lines is allowed membership. Annual meetings serve as a way for members to get to know the people who run their cooperative, and it is where members are updated on business matters. Every fall, Coweta-Fayette EMC convenes because of a belief in the cooperative principle of Voluntary and Open Membership.

The EMC also adheres to the notion of Democratic Member Control, which means members vote for a director who represents them on a board that in turn governs the co-op. Annual meetings serve as the forum for these elections.

As for EMC subsidiaries, consumers of True Natural Gas were entered into the running for a gas grill, and Relyco Security held a drawing for a year’s free system monitoring. The grand EMC prize was a $1,000 electric bill credit.

During the business meeting, W.L. Clements, Alice Mallory and Mildred Winkles were declared winners of the board election and will serve another three-year term. 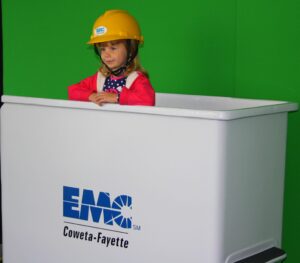 Haley Land, 4, of Newnan, poses for her “Little Lineman” bucket shot in front of a green screen. 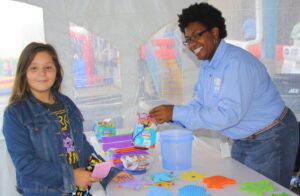 Natalie Procksell, 10, of Newnan, puts the finishing touches on her craft with a little help from EMC Customer Service Representative Dawn Williams. 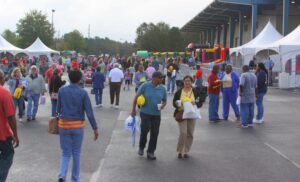 As the fog lifted, the crowds grew at Coweta-Fayette EMC’s 68th Annual Meeting and Member Appreciation Day in Palmetto Oct. 10.