Linemen Journey to the Mountains of Bolivia

At 13,000 feet above sea level in the Andes mountains of Bolivia, wind and sun beat down on the rocky slopes. Coweta-Fayette EMC linemen Richard Davis and Jeremy Brown spent two weeks there along with 12 other linemen from Carroll EMC, Flint Energies, Jackson EMC and Cobb EMC. The men brought power to two farming communities in the department (state) of Cochabamba.

Davis, Right of Way Foreman for CFEMC, said an organizer assured the group the landscape would be rolling hills. “The only thing that was rolling was us down the hill,” he joked.

“It was the toughest project I’ve ever been on,” said Davis.

That’s partly due to the steep landscape, partly because of the altitude. At 13,000 feet, the group struggled to breathe.

The linemen worked to energize the communities of Murmutani and San Isidro, where people live in adobe houses for part of the year to farm. “Most of them are harvesting potatoes right now,” said Davis.

The farmers and their families had no electricity on the mountain, but “they get by just fine,” said Davis. Their adobe homes keep them warm at night and cool during the day. They use water flowing from the mountain to wash their clothes and keep milk cool. “It’s a very simple life,” said Davis.

While the community had no dire need for electricity, the desire was there. Power poles made from Eucalyptus trees already dotted the ground, ready for crews to outfit the poles and pull wire.

After speaking with the group’s local translator, Davis said most people in the two communities would probably buy a television. Davis supposed they might also want refrigerators to store food longer. And, having lights would mean more time for them to enjoy their day before going to bed. “Down there is gets dark at 6:30 at night. Slap dark,” said Davis.

Even though the locals survived without electricity, the whole community came out to pull wire. “I don’t ever think I’ve seen a community come together like they did there,” said Davis. Women with babies on their backs helped, as did seniors and young children.

“If it hadn’t been for them, we might not have gotten the second community energized,” Davis said.

Davis recalled seeing a young boy, barely tall enough to reach up and grab the wire, who wanted to help.

“That was one thing that we had all talked about. This is history for them. One day that kid will say, ‘Man, I remember when they brought the electricity in.’ It’s something that’ll stick with them from now on,” said Davis.

As a cooperative led by your friends and neighbors, it’s just natural that Coweta-Fayette EMC would want to take care of our community. But why do we send our linemen to developing countries like Bolivia?

Imagine living without electricity. Having electricity means a better quality of life. The mission of any international trip remains the same: “It’s about improving the lives of others,” said Davis, and “It’s about helping somebody out that doesn’t quite have it as good as you do.” It’s all part of our cooperative spirit. When we work together, we can achieve great things. 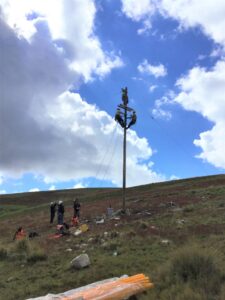 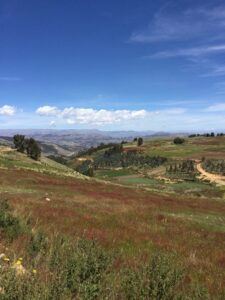